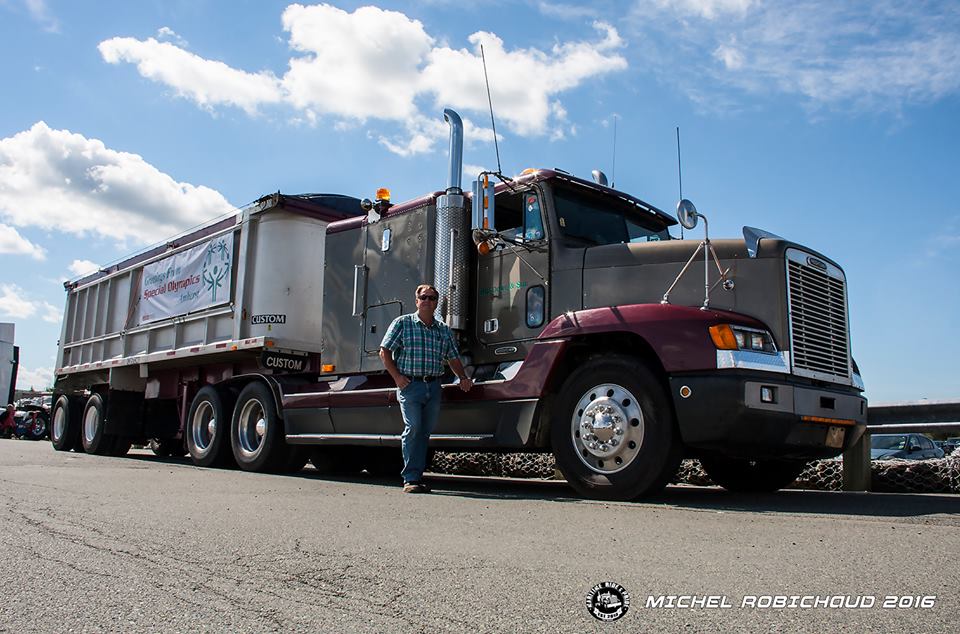 The flowers are blooming, the birds are chirping, and the sun is – dare I say it – here to stay. Summer is officially here, which means the countdown begins for our Nova Scotia Truck Convoy for Special Olympics. Planning is well underway, and the drivers are lining up as each week goes by.

This year, to let our drivers know how much they mean to us, we will be doing driver appreciation profiles.

Que Bill Dowe – one of our awesome Truck Convoy drivers. From Amherst, this will be Bill’s third time participating in our Convoy, and he couldn’t be more excited. Bill started his career in trucking 41 years ago, doing line haul work for 17 years. After which he switched to aggregate hauling and excavation work. He joined the Truckers Association of Nova Scotia in 1993, where he became County President in 1994. In 1999, Bill was named Director of the Provincial Body. Since then he has served in various positions, leading to his current position, Director with the Board. He is also a board member of the Amherst Chamber of Commerce.

As an extremely active community member, Bill takes part in a multitude of community programs and events. He has helped the Amherst Special Olympics by donating his truck and trailer to participate in the towns Christmas parade for the last two years. Last September, Bill also co-hosted Amherst’s first every Truck Show and Shine, with proceeds going to the Amherst Special Olympics. He supports Early Intervention Nova Scotia, as well as local sports programs, and various charities mostly involving children and youth. Bill also won the 1st ever Darrell Ward Giving Back award at the 2016 Nova Scotia Truck Convoy.

Outside of his work, Bill enjoys boating, biking, and spending time with his two granddaughters – oh – and of course, trucks.

Bill will be in the Bill Dowe Trucking & Excavating truck on the day of the convoy – see you there.

The countdown to the 2017 Truck Convoy for Special Olympics has begun – can you believe it? Just 100 days left. Planning has officially taken full force. Sponsors are lining up, the drivers are getting in gear, and our athletes couldn’t be more excited.

It doesn’t seem that long ago that the Nova Scotia Truck Convoy for Special Olympics began its journey – way back in 2012. It is now 6 Convoy’s later, and we’re doing things bigger and better. With 200 trucks, awesome sponsors, and exciting event lineups, you can be sure this year’s convoy will be more spectacular than ever.

This year’s event will take place on Saturday, September 23rd. With just over 3 months to go, we already have 31 registered participants!

If you would like to register, go to https://www.truckconvoyns.ca/drive/register/ and download the registration and pledge form. Fill it out, and send it to:

Please include a $125 cheque for your registration fee. Be sure to make out all cheques to: Special Olympics Nova Scotia. If you wish to pay using another method, such as credit card over the phone, please contact Anne Marie Shannon at (902) 429-2266 ext. 2.

Follow us on our Facebook Page @TruckConvoyNS to keep updated with all of the exciting news coming up for this year’s convoy.

On September 24th, Special Olympics Nova Scotia celebrated their 5th anniversary of hosting the World’s Largest Truck Convoy – Big Rigs, Big Hearts, Big Results, presented by Irving Oil. In just five years this event has raised almost $300,000 ($114,000 this year alone) to help support athletes with an intellectual disability both on and off the field of play. It has helped to create new programs, fund athletes to attend Provincial and National competitions, offer training to coaches and volunteers, create social change and just as significantly bring awareness to the organization and show our community the “ability” not “disability” of the population we support.

Each year the convoy invites a grand marshal to the event. Someone who represents the industry with pride, yet someone who has a #bigheart for their community and gives back. This year that person was Darrell Ward from Ice Road Truckers. Discussions began in early March and within a few days, Darrell was excited to travel to Nova Scotia to meet the athletes and his fans. Darrell had been the grand marshal for a similar event in Tinley Park, Illinois and had developed a strong passion for the athletes of Special Olympics.

On Monday, August 28th tragic news began to unfold. Darrell had lost his life in a plane crash along with his pilot. The news was devastating. Everyone in Nova Scotia was truly looking forward to meeting Darrell in just under four weeks. “What will you do now for a grand marshal? Will you still host the event?” Good question, what would Special Olympics Nova Scotia do? Of course the event would still go on – but how? How do we turn a tragedy into something positive? You see, Darrell was more than just a “convoy marshal” he had become a friend. His team had become like family.

On Tuesday, long-time friend and Manager of Darrell Ward, Bob Stanton, called to tell us that #TeamDarrell was not going to let our athletes down. It was very important to Darrell to do what he could for our athletes and to meet his fans in Eastern Canada. Within a week the “Darrell Ward Tribute Tour” was set in motion. Diesel Spec was on board to help offset costs; Chrome and Steele Radio were working behind the scenes to get the word out about the Tribute Tour; Marc Springer (Snortn’ Boar Trucking) from Shipping Wars had just spent the previous weekend with Darrell and heard his passion, and Todd and Tamera Sturgis from Trucking is Glamourous (also with Darrell and Marc the previous weekend) were travelling down because Darrell was a true friend and showcasing the positive in the trucking industry is what they do. The pieces were all in place. Then an unexpected gift – his son Reno Ward would be joining the team to honor his dad. Reno had appeared in three episodes of Ice Road Truckers, but since then had retreated to college live and football. In his first real public appearance with fans and events, Reno knocked it out of the park and made his dad proud.

The Darrell Ward Tribute Tour was a success! A large banner featuring Darrell’s photo led the event, while drivers all jumped on board by sporting a memorial decal on their bumper, and the first annual Darrell Ward Giving Back Award to Mr, Bill Dowe from Amherst Nova Scotia. We all felt his presence in a very “special” way. We posted picture after picture on our Facebook group throughout the four days of our tour and at the oddest time, one would appear upside down. This began the day before the tour started and continued until convoy day.

With 200 trucks registered for the World’s Largest Truck Convoy for Special Olympics in Nova Scotia we can now boast that we are the second largest event in Canada! Quite an accomplishment for just five years. This year alone we raised in excess of $110,000 for our athletes thank to the sponsors, drivers and fans.

Honourable mentions go to our top fundraiser Lennie Wilson from TDR Transport who lead the convoy for the second year raising $4600 as well as James Downey from Atlantic Road Construction and Paving who raised an amazing $4440. As well as our top fundraising Team – Bluewater Agencies, drivers Dwight Latter and Robert Laybolt and East Coast International who raised an additional $6,700 during their two open house events.

It is though the donations from our drivers and our sponsors that we are able to create #bigresults. Thank you to Irving Oil, East Coast International, Diesel Spec, Clearwater Seafoods, Work Authority, Hull Transport, Nova Truck Centres, Bayview Trucks and Equipment, MacLeod Lorway Insurance, Auto and Trucking Atlantic, Fisher Transport (who also raised an additional $3000.00), Leading Edge Excavation and Trucking, Nova Scotia Trucking Safety Association, Wolseley Canada, and all the supporting donors who helped make the day a success including our Law Enforcement Partners whose support makes this all possible. Agencies that attended included: : Amherst, Bridgewater, Cape Breton, Halifax Regional, Stellarton, Kentville, Nova Scotia Vehicle Compliance, RCMP, Department of Fisheries and Oceans, Military police. What a tremendous show of support! Thank you everyone.

Jump on over to our FB page to see photos from the day!

Many of our volunteers run weekly programs across the province. Here at Smokey Drive School in Lower Sackville, Meredith Otley leads her crew at their FUNdamentals session every Wednesday. www.specialolympicsns.ca/what-we-do/youth-programs/fundamentals-ages-7-12/ ... See MoreSee Less

Session: Wednesday, April 21, 2021 – 8:00 pm-8:45pm EST (English)specialolympicscanada.zoom.us/j/92445709490 “Being the best I can be; preparing myself as an SO volunteer”Presenter: Natascha Wesch – Special Olympics Team Canada Mental Performance LeadNatascha is a Mental Performance Consultant, a Certified Mental Health Professional and a Canadian Certified Counsellor. As a former international rugby player, varsity hockey player, and competitive gymnast, Natascha understands first-hand the qualities, characteristics and mental skills required for peak performance. Natascha has been involved as a coach at the high school, club, provincial, national, and international levels. She established and developed one of the most successful university rugby programs in Canada, was instrumental in the development of junior women's representative rugby in Ontario and Canada. Currently, Natascha mentors elite coaches through the National Coaching Institute (Ontario) and delivers Mental Performance Courses as part of the Advanced Coaching Diploma Program at the Canadian Sport Institute Ontario. Natascha is the Mental Performance Lead for SO Team Canada preparing to go to the Special Olympics World Winter Games in January 2022. ... See MoreSee Less