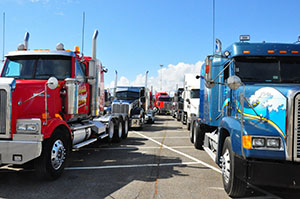 With 57 trucks and $18,900 raised, the 2012 World’s Largest Truck Convoy for Special Olympics exceeded our wildest expectations. Truckers from around the province united in a convoy that stretched nearly a kilometre through the busiest streets of Dartmouth, Cole Harbour, and Eastern Passage. Families gathered on the sidewalks to cheer on our mighty convoy — while the celebration at Shearwater was a blast for everyone involved.

The convoy began at “F Hangar” 12 Wing Shearwater, before proceeding through Dartmouth, Cole Harbour, and Eastern Passage. On its way, it passed many notable landmarks, including Dartmouth General Hospital and the Cole Harbour Shopping Center. Afterwards, hundreds of people joined us in a celebration at “F Hangar,” CFB Shearwater. Live music was presented by local group Outbound and artist Regan Boucher.

On September 15, 2012, truckers and companies from across the province joined together to form a mighty convoy. Here are the companies who volunteered their time and efforts to help Special Olympics athletes.

Every year, more than 85,000 volunteer law enforcement officers participate in the torch run throughout 35 nations, raising more than $38 million for local Special Olympics programs… more than $300 million since its inception in 1981!

Inspired by the impact Special Olympics had on his life through his participation in the Law Enforcement Torch Run, combined with his family’s involvement with the trucking industry, Norm Schneiderhan, a Corporal with the Orange County Sheriff’s Department, created the World’s Largest Truck Convoy in 2001. Since then, the convoy has spread across North America, with participation in 24 states and 4 provinces.

The convoy wouldn’t have been possible without the support of the Halifax Regional Police, who provided logistical and operational support to ensure that the convoy ran smoothly.

We would also like to extend our thanks to the fire departments from the following communities:

These amazing men and women are part of a Canadian organization united around their common love of motorcycling. All of its members have served or supported service in the defence of our country. During the convoy, they served as our outriders.

Friends of the Convoy

Here are just a few of the hundreds of photos taken during the 2012 convoy. To see all of the photos we took, check out our photo albums on Facebook:

Truck Convoy on the Streets

The official Convoy 2012 video, plus some videos of the event taken by  intrepid observers along the route.

The following videos of the truck convoy were posted on YouTube by bulldaisymom:

As the day closes and I reflect on our day, I can not even speak without getting tears in my eyes! So many wonderful truckers have left such a wonderful impression on me. This group overwhelms me. To think they raised $10,000 in pledges — for an organization many have no connection to — is amazing to me.

One trucker wanted lead truck so bad, but gave up the bid to let another company with an athlete win, because he could not bear to bid against an athlete.

I have been doing fundraising events for Special Olympics for 10 years. My dad is a trucker. This event has by far been the best yet. It has drawn so many emotions from all. Even my long-term volunteers, who I have never seen cry, cried today!